Can Guppies And Goldfish Live Together?

Written by Adam Edmond Reviewed by Editorial Team
Updated on May 2, 2022

Goldfish is a cold water species and is ubiquitous. They are generally found in ponds, reservoirs, and freshwater habitats. They are the most common aquarium pets because they do not need much maintenance.

There are two common types of goldfish– the normal one and the fancy one. Compared with the normal goldfish, the fancy one needs warm water to survive. So, if you want to pet fancy goldfish, you must not keep it at a temperature lower than suggested.

Generally, goldfish require a water temperature between 68° to 74° F. While this fish species can survive at a temperature lower or higher than the suggested, it’s advised not to change the temperature quickly because then it might send a shock to them. And this can kill them.

On the other hand, guppies are tropical freshwater fish that are inexpensive to take care of. Probably that’s why guppies are other popular aquarium fish that people like to keep.

Beginners are often advised to keep guppies because they are easy to take care of. But the thing with guppies is that they cannot be housed with every fish as they are so small. So, it’s essential to check the compatibility before keeping them with others in a tank.

As you know about both the fish species, you might be wondering whether it’s possible to keep guppies and goldfish together. So, the answer is yes.

One of the biggest reasons guppies and goldfish can live together is that both are highly calm fish species. They have peaceful behavior, which means they are less likely to cause trouble.

But while doing so, you need to be careful because goldfish can grow bigger than guppies. Thus, there is a potential risk of guppies being eaten by them.

Also, you might need to keep an eye on the fish tank because goldfish are likely to eat the guppies fry. And since guppies can reach sexual maturity in just three months, you should try to create friendly living conditions for them.

Here are two ways you can save the guppy fry from the mature goldfish.

First things first, you can remove the pregnant female guppy from the tank and place it in a separate container where it can easily lay eggs without any fear. But remember that it’s a cumbersome process. So, you might need to maintain around two tanks.

Another way of helping pregnant guppies to breed safely is by placing them in the breeding box. You can do this just before it’s about to lay eggs. This way, the guppy fry will be protected from the mature goldfish.

Keeping Guppy Fish with Goldfish in the Same Tank

As you have already read, guppies and goldfish can live in the same tank, but a few things need your attention.

Indeed, goldfish are of different types, but all of them grow bigger than guppies. The minimum length a fancy guppy can grow is around 6 inches, which is 15 cm. Similarly, the maximum length a normal goldfish can grow is 30 cm.

When goldfish are small, they don’t create a problem. But when goldfish start growing bigger, they might see small guppies as tasty snacks, further creating a deadly living condition for them.

Another thing that does not work in their favor is that guppies like to stay in the group. On the other hand, goldfish do not like to be in crowds as they are calm. You can, however, solve this issue by having a bigger tank.

Feeding Can Become A Problem

While feeding the fish, you are likely to encounter another problem. That’s because goldfish are greedy eaters. So, wherever you put anything inside the tank, they will try to claim it as their own. Thus, there does not remain enough food for guppies.

It’s normal for fish to fall sick when the temperature rises or falls below their tolerance level. If this happens, guppies will struggle to survive in colder water, and in warm water, goldfish will have a problem.

So, you see, making goldfish and guppies live together is a little difficult. But if you are determined, you can make it happen. And when you keep these two fish together, you must always keep an eye on them.

Adding a few decorative items to the tank can enhance its beauty. Also, it can give extra space to guppies where they can hide when getting chased by bigger goldfish.

Below are a few decoration items that you can consider purchasing.

One of the best things to add to your aquarium tank is an undersea treasure chest driver. It will give a mystery to your tank, and also, it can offer a safe place to guppy for hiding. 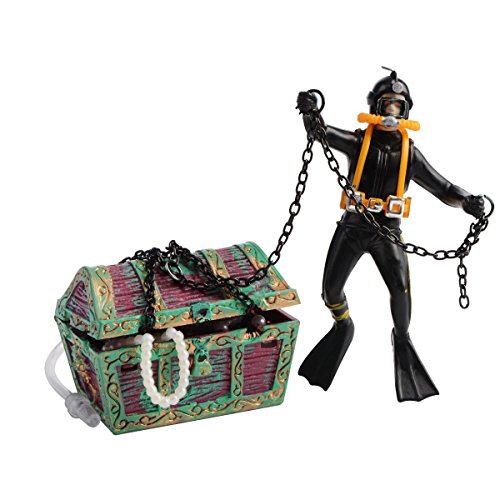 Treasure chest drivers are made of non-toxic and pollution-free items that will not pollute the tank. Generally, this decorative item requires an air pump to work properly. While fitting the chest driver in the tank, you can also add some gravel or sand. 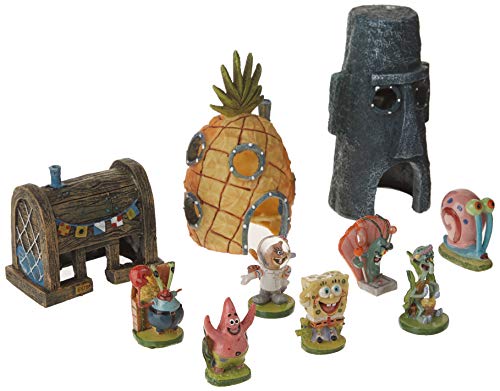 Besides an undersea chest driver, you can also add a Penn Plax SpongeBob aquarium decoration set. This set includes ten-piece decoration items that look cute. These decorative items are made of friendly materials. Thus, they do not pollute the fish tank.

The fish can even use this decorative item for hiding. That means by adding this ten-piece set to the fish tank you can provide smaller guppies enough places to protect themselves.

How Many Guppies Can You Keep With Goldfish?

To keep guppies and goldfish happily together, you need to get a big tank to make the fish feel safe. At a minimum, the fish tank should hold around 20 gallons of water. This way, three guppies and one goldfish can live together.

While housing these fish together, you need to remember that the number of goldfish should always be less than guppies. That’s because goldfish can grow double the size of guppies, which can be dangerous.

If goldfish grow too big, then it’s advised to remove them. But if you can’t remove them, you must add enough hiding spots. This way, both the fish species can live happily in the same tank.

You can keep guppies and goldfish together as they are calm-natured fish. But it’s essential to check on a few things because goldfish can grow bigger, creating a problem for guppies. However, if you are determined, you can keep them together without any issue. To maintain the water temperature, you can add a heater.

So, before housing guppies and goldfish together, do quick research on their nature. This way, you can understand how they will react in each other’s presence. And then you can take proper precautions.