The blind cave tetra is unique among freshwater aquarium fish. Learn all about its care and keeping in this informative article.

When it comes to stocking your freshwater aquarium you have a nearly unlimited number of options to choose from. So how do you go about selecting which species you want to keep in your tank? Some aquarium hobbyists choose based on the appearance of the fish or their tank requirements. If you are looking for a freshwater species that is truly unique and challenging to keep, consider the blind cave tetra.

The Astyanax mexicanus species is also known as the Mexican tetra and that is the common name the surface-dwelling form of the species takes. The other subspecies, known as the blind cave tetra, is in fact blind. While the surface-dwelling form of the species looks like any other tetra with a shiny silver body and red coloring on the fins, the blind form exhibits albino coloration (a lack of pigment) and clear fins. The most notable physical difference between the two, however, is of course the fact that the cave-dwelling form often has no eyes.

Both subspecies of the Mexican tetra grow up to about 4.7 inches (12 cm) in length and they exhibit the traditional characin shape that most tetras have. The blind cave tetra is not always completely blind, but it often loses its sight slowly after hatching. Different populations of blind cave tetra have different levels of blindness – some have limited sight while others lose their sight completely and their eyes become covered over, leaving them totally blind. An example of this phenomenon is the blind cave tetra found in the Micos cave – these fish have limited sight but the tetras found in the Pachon caves are completely sightless.

Although the eyeless form of the species has no sight, it is not helpless – it actually possesses several unique adaptations that allow it to survive in the dark, underground cave environment. All fish have what is known as a “lateral line” – a system of sensory organs that helps the fish to detect changes in pressure and vibrations in the water. This system of organs is particularly strong in the blind cave tetra and it relies heavily on it to find food and to avoid obstacles in the water. With this system of sensory organs being so strong, the blind cave tetra has no need for vision.

The habitats of the Blind Cave Tetras are dark caves that are very rocky. There are many underground caves available that facilitate providing the ideal atmosphere for this blind species. Along with being blind, they have developed pigmentation issues in the skin cells and clear fins. Most of the species of Blind Cave Tetra do not have eyesight and are blind. However, a minority of them have very limited sight. The caves of Micos have plenty of these limited sight Cave Tetras, and Pachon caves have plenty of fully blind ones.

The Blind Cave Tetra can survive in the natural environment without any issues. This is because they possess sensory organs which are efficiently stimulated by vibrations and changes with the pressure in water. This stimulation facilitates them to find food and adjust in the dark. Hence their lack of sight is not a concern even when they are in tanks.

The Blind Cave Tetra have pink pigmentation with silver lines on their body. They can live up to 5 years. Irrespective of their gender, the Blind Cave Tetra has similar physical appearances. However, the male fish cannot be distinguished from a female fish due to the lack of distinctive features. Therefore, the only option to find the difference between the male and female fishes is before spawning. Usually, the female fish are considerably larger than the male fish. 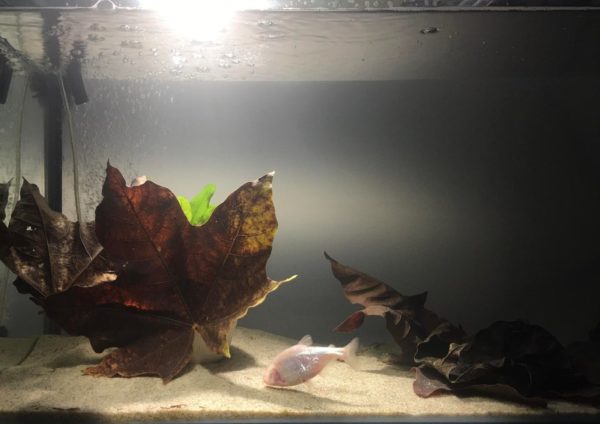 The fishes that are found in water bodies of deep dark caves do not have sight. There is no penetration of sunlight to reach the water bodies of the deep dark caves. Hence the requirement of eyesight is zero. The presence of eyes does not make a difference as the habitation adaptation is dark. Hence the eyes are of no use. Hence, after many generations’ evolution, the variants of the Mexican tetra fish have been developed without eyes.

Caring for the Blind Cave Tetra

Because the blind cave tetra has no sight you may think that it is difficult to care for. In reality, caring for the blind cave tetra is not significantly different from caring for any other species of tetra – you just have to make a few accommodations in terms of tank décor. Like you would for any species, you also need to cater the conditions in your tank to suit the needs of the blind cave tetra. This species prefers warmer tank temperatures between 68°F and 77°F (20°C to 25°C) and a water hardness around 30 dGH. The blind cave tetra likes neutral to slightly alkaline water as well, so keep the pH between 6.5 and 8.0.

The blind cave tetra is not a particularly large species of fish but it is recommended that you keep it in a tank no smaller than 20 gallons in capacity. Like other tetras, the blind cave tetra is best kept in schools with several of its own species, so take that into consideration when choosing a tank size. In terms of decoration, it is best to keep things simple. Line the bottom of your tank with a soft sand or fine gravel substrate and decorate sparsely with flat rocks and pieces of driftwood. Live aquatic plants are not part of the blind cave tetra’s natural environment but you can add some floating plants to your tank to keep oxygen levels high and to diffuse tank lighting so it isn’t too bright for your fish.

When it comes to feeding your blind cave tetras you will not find the task to be very difficult – these fish are likely to accept a wide variety of different foods in captivity. In the wild, these fish eat insects and small crustaceans. In captivity, these fish will eat just about anything you offer them. To keep your fish in good health, feed them a staple diet of commercial flake or pellet foods then supplement that diet with plenty of fresh, frozen, and freeze-dried foods. These fish particularly enjoy blood worms and brine shrimp, so keep a steady supply handy. Sinking pellets or wafers can also be offered because these fish sometimes scavenge along the bottom of the tank for food.

Other Tips and Tricks

By now you should have a good understanding of the blind cave tetra as a species as well as its tank requirements. One other thing you need to think about, however, is tank mates. Because the blind cave tetra is in fact blind, you need to avoid keeping it in a tank with other species that might bully it. This is not to say that the blind cave tetra is completely helpless – in fact, it has a tendency to be a little nippy at times so you don’t want to keep it with fish that have long, flowing fins. The best tank mates for this species are peaceful community fish that occupy a different level of the tank. Corydoras catfish, for example, are a bottom-dwelling species that would do well with the blind cave tetra. Other tetras, barbs, and gouramis also make good tank mates as long as their tank requirements align.

Another factor you may find yourself thinking about in regard to the blind cave tetra is breeding. Surprisingly, these tetras actually spawn fairly readily in captivity as long as the tank environment is to their liking. Because it is nearly impossible to tell males and females apart, your best bet is to raise a group of six together and allow them to pair off naturally. When the species spawns, they cast their eggs across the bottom of the tank so consider adding some aquatic moss or stretch a length of mesh across the tank to keep the eggs safe until hatching. The eggs generally hatch within 24 hours and the fry will subsist on the remainder of their yolk sacs for another 5 to 7 days at which point you need to start feeding them.

Not only is the blind cave tetra an incredibly unique and interesting species, but it can also be a fun challenge for the experienced aquarium hobbyist. If you are thinking about creating a new tank or stocking your existing tank, the blind cave tetra is definitely a species to consider. 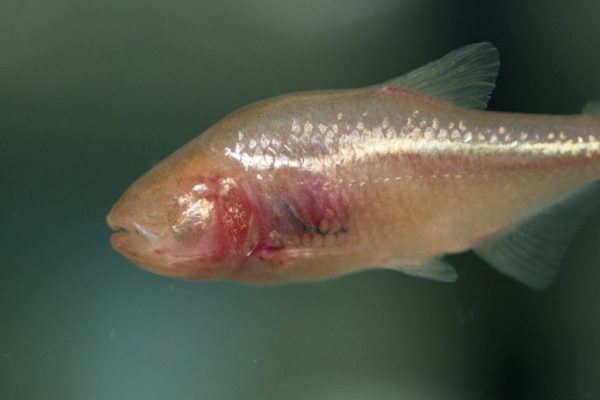 Since Blind Cave Tetra is likely to be affected by the combination of any of these diseases, it is highly essential to keep the water clean. This stops the bacteria from spreading. However, all sudden changes made to water parameters cause stress to the Blind Cave Tetra and, thereby, illness. Also, their immunity system slowly weakens. Therefore, it is recommended to quarantine the new fish from the existing tank to identify any signs of illness in the fish.

Blind Cave Tetra initially hatches with fully developed eyes. Blind Cave Tetra is bizarre because they are not merely blind but born with developed eyes that regress along with their growth. The bones around their eye orbits have completely collapsed. The eyes are now replaced with empty sockets that store fat deposits. This part of the body is covered with translucent silvery scales.

Most of the Blind Cave Tetra is symmetrical. Competent locomotion in the water is possible by these fishes. However, it is still a mystery how they can survive in the total darkness and remain adaptive.

It is not difficult for these variants of the Mexican tetra fish to survive. Though the completely developed eyes are not available, these fishes are facilitated with powerful sensing organs. These organs serve the fishes with all features an eye can deliver and help them with their locomotion activities. Furthermore, since these organs are influenced by any vibrations, any hindrances can be detected with ease.

Blind cave Tetras are known to be the most peaceful fishes. However, as they age, they turn out to be aggressive. Nevertheless, they do not involve nipping the fins of other fishes unless and until they are kept with slow-moving fishes.

How Big Does A Blind Cave Tetra Get?

The life span of Blind Cave Tetra fish is up to 3 to 5 years. However, it is understood that these fishes can live longer.