How to Increase Oxygen In Fish Tank

Is oxygen necessary for an aquarium? Well, fish can survive in an aquarium without extra oxygen, but only for a few days. Why, you might wonder? That’s because, after a couple of days, the surface agitation of water will decrease. For this, you can use an oxygen tank as it helps increase the water’s surface agitation.

In simple words, a pump provides extra oxygen that fish require for living comfortably in the water. An air pump in the tank increases the air circulation in the water.

The pump makes water move, which keeps the fish healthier and happier. Also, a good quality air pump decreases the death zone, say algae build-up. Not to mention that it also serves as a decoration and makes an aquarium look better.

Besides this, adding an oxygen pump also helps in decreasing the bacteria built up in the tank. How, you might wonder? That’s because pumps come with motors that sponge filters can use for keeping the tank environment clean.

The best thing about sponge filters is that you can move them to a different tank if required. And in no time, the filters will start working, making another tank a hospitable environment to live in.

You see, an oxygen tank for a fish tank is a must-have. In this post, we have discussed the causes and symptoms of low oxygen so you can know when your fish needs help.

Did you know that the oxygen a fish breathes in the tank does not directly come from the water? Instead, it comes from the surrounding areas. It happens because the oxygen and hydrogen that make the water cannot be separated. Thus, fish can’t breathe inside the water.

The process where fish take oxygen from the surface for breathing is called gas exchange. Below are a few ways to increase oxygen for fish in the tank.

Studies have shown that regular water change of the fish tank can increase water. You can change 50% of the tank water with fresh water. Changing of water will also keep the tank clean and fish healthy.

Pouring water in the fish tank from a height can also help in increasing the oxygen level in the water. The higher the height of pouring water is, the better the oxygen will get dissolved in the tank.

Once you have poured the water from a height, you can then pour the existing water into the tank using a container a couple of times. Doing this can also increase the percentage of oxygen in the tank water.

If you manually stir the water surface, it will result in increasing the oxygen level. If you want, you can repeat the process a couple of times.

If the oxygen level of the tank water goes down, you can use a good-quality air pump. It’s an easy and effective way that can release the air in no time.

How to Increase Oxygen During Emergency?

If there ever occurs an emergency like a power outage or if the temperature of water increases, then you can follow simple steps to increase the oxygen level.

If the temperature is high, you can change the water in the tank. While doing so, you can even add ice cubes. Doing this can effectively bring down the tank water temperature without causing any harm to the fish.

You can put the ice cubes in a zip lock bag and then tank water for better results. 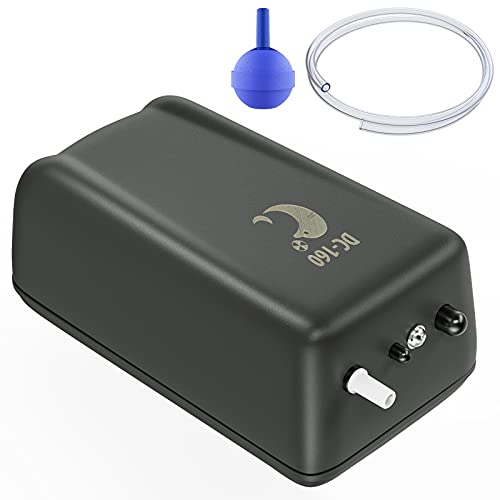 In case of a power outage, a battery-operated air pump can be beneficial. While battery-operated pumps are not as effective as electric-driven pumps, they can surely keep the fish alive at the time of emergency.

Also, if you have to use the battery-operated oxygen pump for a long time, you should check for ammonia. If there are traces of ammonia, you can use a certain kind of solution to reduce it.

How to Increase Oxygen Level Permanently

Are you wondering whether it’s possible to increase the oxygen level of tank water permanently? Well, it’s possible. Below are six ways to do it.

If you have multiple fish in the tank, you must consider moving them. That’s because an overcrowded tank can make the fish gasp for air, which is not healthy.

While keeping the fish in the tank, remember the “one-inch rule.” This rule says that there should be 1 gallon of water for every fish. Follow this rule and remove extra fish to create better-living conditions.

Generally, the tank’s water temperature can increase for a few reasons, including the aquarium being kept in direct sunlight. Besides this, very high ambient temperature, heater malfunction, and aquarium light heated with water can also increase the water temperature.

So, if you don’t want the high temperature to cause fish death, you can consider adding a fluorescent bulb. Besides this, you can also add aquarium chillers to keep the fish happy and relaxed.

At last, if the aquarium is under direct sunlight, you can move it to bring down the temperature.

Fish are more likely to stay happy in a clean aquarium than in a dirty aquarium. To keep the aquarium clean, you need to replace 20% water with fresh water every week. You can also remove the food that reaches the bottom of the tank.

Many aquarium owners choose to add nitrates and ammonia into the tank as it’s an excellent way of removing bacteria. It can also reduce the water build-up over time. If the tank is regularly cleaned, it will increase the water filter’s life.

If there is no water movement in the fish tank, the fish might not live properly in it. To make the water move inside the tank, you can add a filter. 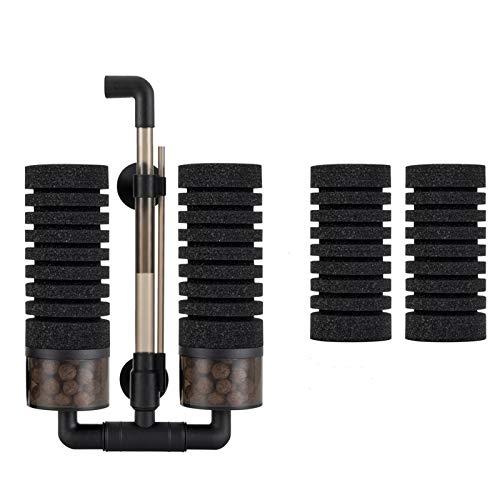 Generally, HOB filters are used as they increase the air-water contact. Also, this filter equally distributes the air in the tank.

Besides HOB filters, people also use spray bars. The best thing about spray bars is that they spray the water in the aquarium at a good height. This thing adds more oxygen to the water. 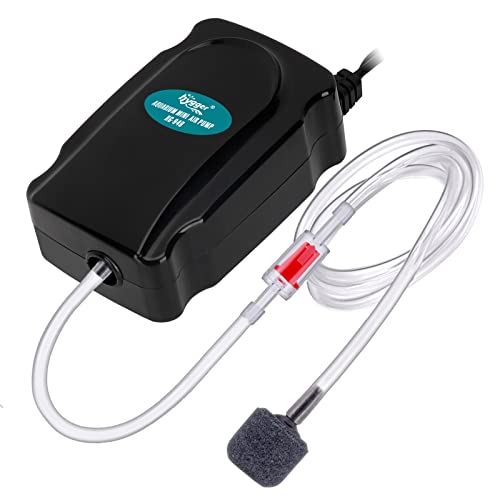 Another way to create water movement in a tank is by adding an air pump and bubbler. For better results, you can keep the air pump three inches below the top. 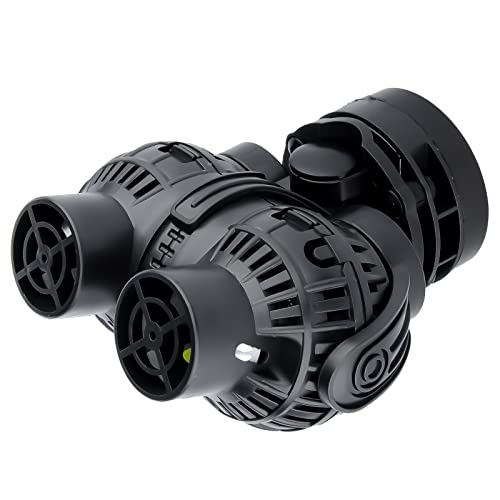 Using a powerhead or water pump can also offer better results by adding more oxygen to the tank. Depending on the size of the tank, you can increase the number of powerheads. 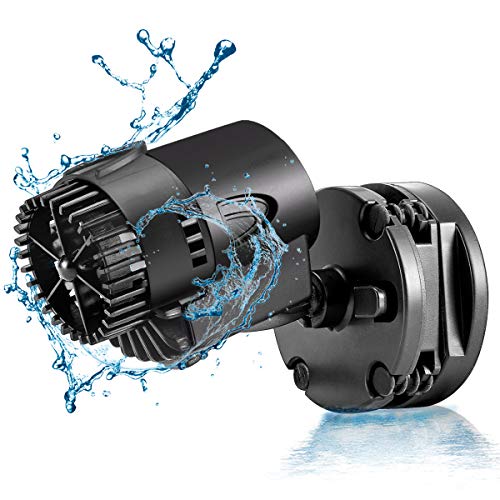 Lastly, you can use a wavemaker to create agitation on the water surface and make the water move. One interesting thing about a wavemaker is that it creates waves, just like waves are created in oceans or seas. So, your fish will like it.

5. Use the Goodness of Plants

Along with show plants, you can also add some live plants to the aquarium. That’s because natural plants will not just give a better appearance to your tank, but it will also help in increasing the oxygen level.

If you are keeping live plants in the tank, make sure that you use proper lighting. The improved lighting will maintain uninterrupted photosynthesis. And it will further help the plant create more oxygen, which will be dissolved in the tank water.

While adding chemicals to the fish tank, read the label. If the label suggests any ingredient that can disturb the oxygen concentration in the water, you should avoid adding it.

Low oxygen in a fish tank is real, but unfortunately, no blaring alarm or flashing light shows this decrease. That means the only way you would know about the decrease in oxygen is when there is trouble in the behavior of the fish.

When the oxygen level gradually starts dropping in the fish tank, you will notice the fish is moving around less. As compared, fish will swim less vigorously. Not just this, but decreased oxygen levels can also make the fish eat less.

So, if you notice that the fish in the tanks are moving less than they should, you must do something to fix the issue. That’s because if the matter is left unattended, it can even create a toxic environment for fish where they can die.

The problem with this sign is that it’s not ideal for less active fish, like glass catfish, plecos, and more. Since these fish don’t move that much, the difference in their movement due to decreased oxygen levels will be hard to notice.

If the oxygen level of the water further decreases, the fish will show signs of labored breathing. During this situation, fish will gasp for air and make rapid gill movements. The increased gill movement helps the fish pass more water to the gills, making them a little comfortable.

Besides gill movements, the low oxygen level of the tank can also be determined when the fish swim on the surface of the water for air. But one thing you need to remember is that surface breathing is expected in certain fish.

For example, bettas or gouramis like to come upon the surface to breathe. So, if you see them on the surface, don’t think that the oxygen level is low. That’s because it’s perfectly normal for these fish species to behave like this.

Lastly, if the oxygen level has dropped, you will notice that fish have started coming on the surface. After coming to the surface, the fish will wide-open their mouth to suck the surface layer of oxygen.

So, if you see the fish doing that, do not wait anymore because it’s the most extreme sign of low oxygen level in the water.

As you know the signs, let’s talk about the causes of oxygen drop in the water. Oxygen level in the fish aquarium can decrease due to a few reasons, which includes:

Among the other reasons, overstocking is the most common reason. It means when the fish tank has more fish than required.

The thing is, each fish requires oxygen to survive. So, the more you add fish, the more oxygen will be required in the tank. And if you end up overstocking the tank, you must be ready to provide sufficient oxygen because if not, the fish will die.

It means that when the temperature increases, the oxygen level will decrease. So, you should always try to keep the water cool so that it holds the oxygen properly.

The oxygen escapes, meaning the level of water decreases. So, it’s always essential to create water movement in the fish tank.

Another thing that decreases the oxygen level in the fish tank is the excess waste. More waste can decrease the oxygen-carrying capacity of the water.

It’s said that prevention is better than cure. So, instead of waiting for the fish to show any signs of low decreased oxygen level, you should create a better living condition.

If the number of plants in the tank is less or if you have used improper chemicals, it can lead to fish death.

So, you must try to increase the oxygen level in the water by changing the water, keeping the recommended number of fish per tank, and creating water movement. You can also do it by regularly cleaning the tank.

PrevPreviousCan Guppies And Goldfish Live Together?
Next7 Best Filter For A 55 Gallon Fish TankNext