The vast African continent has lots to offer in terms of flora and fauna. Its numerous water bodies are home to some of the most beautiful and extremely amazing fish species. Among the extraordinary ones is the African Leaf Fish.

Scientifically referred to as Polycentropsis abbreviata, this sea animal has some interesting characteristics that endear it to hobbyists. It is also a favorite freshwater fish of many beginners as it feeds on a variety of foods. It is therefore less demanding when it comes to purchasing its feeds.

The African leaf fish is native to West Africa. Countries that are original hosts of the fish include Nigeria, Gabon, Cameroon, and Benin. Since it inhabits slow-moving rivers, the named countries have water bodies with suitable conditions for it. As a matter of fact, the waters are rich with submerged vegetation, creating ideal conditions for the leaf fish.

Just as the name suggests, the ALF has leafy patterns on its entire profile. The patterns extend from the head down to the tail. It often gets confused with the Leopard Ctenopoma. When purchasing therefore, it is imperative to pay attention to detail to be sure it is actually the A.L.F. Some characteristics describing the fish which would be helpful are:

All types of fish kept in captivity thrive when the tank conditions mimic that of their natural habitat. For the African leaf fish to remain healthy, it is important to maintain the following tank conditions. 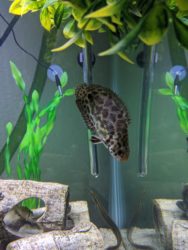 A 50 gallon tank would be ideal as it makes extensive movements mostly in search of live prey. Place plenty of rocks with crevices that mimic caves. The ALF stalks its prey from hiding positions and will spend a good amount of its time hiding.

The tank should be dimly lit. If for one reason or another very dim lighting conditions cannot be provided, plenty of plant life can be added to the tank. While at it, only throw in plants that are recommended as some plants do not provide a suitable environment for the fish. Echinodorus species can be a good addition.

Provide driftwood too, as this gives them some sense of security. Remember, while they are an aggressive species, at times they get nervous. Provide minimum water movement as this favors their predatory ways. Your tank should maintain temperatures of between 78 and 89 Fahrenheit. That is about 26 and 31Celcius. A pH of 6.0 to 6.5 is ideal and ensure the water hardness is from 1 to 10H.

As earlier said, the African leaf fish is a predatory fish that enjoys hunting for its prey. It can devour most types of small fish and even medium-sized ones such as guppy and platy fish if these are stocked within the same tank. If possible, provide live feeds of mosquitoes and worms, though in small amounts these tiny animals could hardly satiate the ALF’s appetite.

While the ALF is more appreciative of live foods, there are many ways to offer it frozen feeds and flakes effortlessly. Hobbyists that have kept it say that when fish pellets are offered while the other tank-mates are having meals, the ALF is likely to eat without a hassle. The secret is to flick meals to the other tank-mates and it will have its appetite aroused. As soon as it moves closer, tubifex worms, shrimps, and crickets should do.

One of the most amazing characteristics of the leafy fish is its ability to open its mouth widely as it eats. It has the capacity to eat a prey almost its own size. The fish reaches out wildly to grab its food before quickly flicking it into its mouth.

Like most other types of fish, the ALF does not easily breed in captivity. However, when dense vegetation is provided together with a lowered water level, a miracle may just be in the offing in terms of breeding. Other factors to consider include:

For this fish species, the male builds the nest, choosing a place where vegetation is thick enough to provide protection. Before spawning, it can build several of such nests.

When the female is ready, it can squirt a number of eggs into the nests. These are then fertilized by the male. After between 48 and 72 hours, the eggs hatch. They can be fed on brine. Shrimp nauplii is also suitable for them.

The water temperature should be maintained, same to the pH. In case there are substances that may pollute the water, they should be removed to ensure the tank remains as safe as possible for the young fish.

As soon as the eggs hatch, the pair should be moved to another tank as they are likely to predate on their own young ones.

The African Leaf Fish is largely predatory and can eat smaller or medium-sized fish. Suitable tank-mates should be gourami, Bala shark, Silver Dollar and Pleco. Do not include cichlids in the same tank as they are aggressive too and may stir a war with the leafy fish. The African leaf fish can be a really cute addition to the tank. 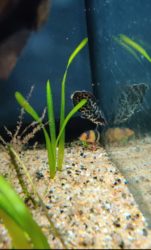 Common Diseases And Their Treatments

Although African Leaf Fish is a warm water species and particularly doesn’t acquire any diseases, they can potentially acquire some common fish diseases. Therefore, you have to take appropriate care to treat them.

Do you spot any red streaks on your fish body? Or do they have to swell around the abdomen or eyes? Then they are the sign of having bacterial diseases. You can treat them with some popular antibiotic treatments such as penicillin, erythromycin, etc.

In case of any fungal infections, your fish would spot grey or fluffy white patches.

When parasitic micro-organisms stay in the tank through live plants, they can easily make your African Leaf Fish the host. Therefore, common parasitic diseases mostly appear in fishes in “Ich.” However, most parasitic diseases can be treated effectively with a copper treatment.

While making any antibiotic treatment approach, take precautions not to affect the biological filtration of the aquarium. Choose a reliable antibiotic that doesn’t kill the good bacteria in your aquarium system.

Not every live aquarium plant responds well to copper treatment medications. Therefore, make sure you use an adequate amount of copper not to suffocate other species in the tank.

Any kind of physical ailment that appears in African leaf fish can be influenced by the environment. For example, if the water quality is not good and the oxygen level is depleting for various reasons, it can cause your fish to gasp, not eat well, and try to get out of the tank.

Are African Leaf Fish Right For You?

Of course, African Leaf Fish can bring uniqueness to your aquarium since they are rare fish species. But you must be able to give the fish its warm water condition to let it live healthily. Moreover, it can be difficult for you to choose its tank mates because they tend to eat the smaller tank mates.

Since they are challenging to care for, the offline aquarium trade is not common. But if you are enthusiastic and committed to having African leaf Fish in your aquarium, go for it after preparing a good living condition for them.

Although the size of African leaf fish is very small, its life span is quite long, up to 10 years. If they are given a healthy environmental condition, they can absolutely touch more than ten years of life span if they don’t acquire any disease condition. If you are thinking of putting this fish in your aquarium, make sure your aquarium size is of or above 70 liters.

Moreover, keep the water condition in mind, i.e., the temperature should be about 79-88 degrees Fahrenheit, pH of about 6.0-6.5, and hardness should vary between 1-10°H. Most of the time, African leaf fish live in from the middle to lower portions of the water body with gentle water currents suitable for hunting since it makes them float like leaves allowing them to attack ignorant prey.

What Do You Feed African Leaf Fish?

African Leaf Face has a predatory nature that enjoys hunting its prey by sneaking upon them. They can gobble up various types of small fish and medium size fishes. Moreover, they can feed on mosquitoes and various worms, but in a small amount which can’t satisfy the fish’s appetite. So it’s ideal for giving them live fish and frozen worms.

You can offer them frozen fish foods and flakes. When they notice other tank-mates eating meals, it can generate their appetite, and you can feed them effortlessly. African Leaf Fish reaches for their food in a frenzied manner to click it in their mouth. If any insects or worms are entering the tank, your tank can be easily cleaned with African Leaf Fish.

What Are Some Good Tank Mates For African Leaf Fish?

African Leaf fish prefer to spend time in solitude, and they are very peaceful creatures. However, keeping them with small tank mates is not ideal as they can eat the other small species. Often it’s misunderstood as aggressive behavior, whereas it’s just their natural living mechanism.

Furthermore, they should not be kept with aggressive aquarium species, which can lead to fights in your water tank, resulting in them getting injured or dead. Instead, find some fish species that share similar living conditions, such as the water temperature and hardness; they can potentially be good tank mates for African leaf fish.

Their tank mates have to be bigger in size and not very aggressive in behavior, so African leaf fish can’t eat them and get into a fight. However, since African leaf fish can open their mouth very wide, they can suck down fishes as large as their size.  Some suitable tank mates are Bala shark, Silver dollar, Gourami, and Pleco, etc.

African leaf fish is a predatory species, often seen while hunting on small or similar-sized fishes or other aquarium creatures. They resemble aquatic leaves whilee flowing in the water; the unsuspecting creatures can’t recognize their hunter and fall victim. However, this feeding nature has a misconception largely for African Leaf Fish to be aggressive in nature.

In truth, they are not aggressive in nature until put in a company with an actual aggressive species. Then, they live in seclusion and are a very peaceful species. Ensure they are kept in a tank with fishes they can’t swallow, and no aggressive nature can be seen within the tank.

Can You Keep Multiple African Leaf Fish In A Single Tank?

Although African leaf fish are not very sociable in nature, they generally don’t show aggressive nature towards their own species and get along with them quite well. But they would not show any schooling behavior towards the species. Hence, you can keep more than one African leaf fish in your tank according to their capacity.