If you’ve got yourself a home aquarium, chances are pretty high of ending up with a snail infestation. Heck, you may even have one going on right now. Of course, you immediately search for ways to deal with this frustrating issue, which is when you realize fish like puffer or clown loach aren’t going to cut it.

Don’t fret just yet, as the assassin snail is are here to wipe out any unwanted guests.

Now, you may wonder if adding more snails is such a good idea, but what you don’t know is that assassin snails are carnivores, meaning they feed on other snails, such as Trumpet snails, Ramshorn snails, and ones belonging to the Physidae family.

So let’s take a deeper look at the ins and outs of keeping such snails; their diet, behavior, breeding as well as extra information you should know.

Getting to know the Assassin Snail

The assassin snail, scientifically known as Clea Helena, is often referred to as the killer or bumblebee snail. It belongs to the Buccinidae family and originally comes from South-West Asia.

They normally live in warm freshwaters, not very deep with a slow current. They’re predators, hunting and eating small living snails as well as decaying organisms.

How about their behavior? Well, assassin snails are seriously slow, so you won’t be seeing much activity in your tank. They tend to come out and feed at night so you might miss them a lot during the day.

They’re generally non-aggressive species, they won’t attack or hurt any fish, only creatures small and slow enough to become prey.

How big are Assassin Snails and what do they look like?

The most distinct thing you can notice on an assassin snail is the conical shell with yellow and brown stripes, hence the nickname bumblebee snail.

Attached to their heads, there’s a pair of short sensitive tentacles that help them move around and find food. Each tentacle has an eye at its end to detect light and motion. You can also see a siphon, a long tube extending out of the shell, for breathing.

A healthy adult will grow to reach a full size of about 1 inch, and some well-fed ones can reach up to 3 inches big. Assassin snails have definite sexes but it’s impossible to tell them apart just by the naked eye.

What do Assassin Snails Eat?

As we mentioned before, assassin snails are carnivores, which means plants aren’t on their food menu so you don’t have to worry about any green life, including algae, in your tank.

Mainly, they feed on shellfish, aka snails, which is why they’re ideal for pest control. Some of their favorite snacks are Malaysian Trumpet snails, Ramshorn snails, and pond snails.

While they can eradicate entire populations of unwanted snails, they aren’t exclusive to feeding on them. They’re opportunistic eaters, as they’ll consume just about anything getting in their way. Dead tankmates, commercial fish food, little living organisms, and frozen foods.

You can also feed them frozen blood worms and fresh chicken liver once they wipe out the targeted intruders. They don’t fancy apple snails, only rare moments when they have to. It’s important to change up their diet and not solely stick to their natural prey.

It’s kinda tricky to tell how much you should feed them as they don’t have an eating schedule, rather whenever they feel like it. However, 1 or 2 snails should do the trick, especially since they’ll pick up any leftover fish food.

Watch the incredible assassin snail in action below.

The thing is, you want to mimic their natural habitat conditions as closely as possible to achieve a perfect living environment in your tank.

Starting with the tank size, you want a 10-gallon tank (40 Litres) in the least, and the more the better. As for the water, the temperature should be somewhere between 70 to 81 °F (24 to 28 °C), resembling warm tropical water. The PH is best kept at a slightly alkaline degree between 7 and 8 with medium hardness for healthy growth.

You need to pay just as much attention to the bottom of the tank. As assassin snails are burrowing masters, a sandy substrate is essential. They spend most of their time digging among the grains unless they’re feeding.

If you want to keep plants inside, you’ll have no problem in this aspect as assassin snails have no interest in plants whatsoever, even as shelter. Plants will go on flourishing as long as you wish.

Decorations are optional, but it would be nice for the snails to have some room to climb and attach eggs.

If you want to provide good and ideal care to your assassin snails, your tank must inhibit its natural habitat. Therefore, the tank water must be fresh and a little saline.

The sand must be soft so that they can effortlessly push themselves down. You can place various rocks on the top of sand for their tiny cave system.

How Many Assassin Snails Can You Keep per Gallon?

For every 5 gallons, you can keep 2 assassin snails.

How long do Assassin Snails live?

The average lifespan of a healthy assassin snail is 2 years. Sometimes they can reach 3 years.

Yes, assassin snails are predators, but only towards other snails. Fish and plants are safe from their raids, consequently, you can add your pick of inhabitants. The catch, however, is that many types of fish may attempt to eat your snails.

Most common community fish should cause no trouble, those include small species like cherry barbs, guppies, neon tetras, and celestial danios. Bigger-sized species like rainbowfish and angelfish would also be fine to play roommates with.

Fish that dwell at the bottom of the tank endanger assassin snails, so if you’re going for such an option, they should be peaceful like Otocinclus catfish. You can add some different bigger snails, or of the same size, such as Nerite snails.

Can you keep Assassin Snails together?

We previously mentioned that you can keep 2 snails together per gallon, which answers the question pretty obvious. Assassin snails barely notice the presence of each other, so as long as you don’t overpopulate your tank, you get to keep as many as you want. 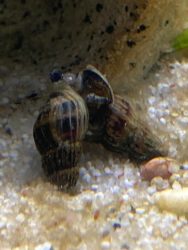 We said that assassin snails aren’t hermaphrodites, they have defined sexes but can’t be recognized visually by appearance. For this reason, if you’re to grow your population, you should have a group of 6 snails or more, to increase the odds of having both males and females together. They’ll take it from there!

Leading up to breeding, couples begin to follow the trail of each other, ending up stuck together and moving around as one. They don’t separate for weeks even while feeding. Once mated, the female lays each egg individually as yellow sacs shaped like boats begin to appear close to one another.

After 1 month, give or take a few days, these eggs will hatch and the baby assassin snails will burrow into the substrate almost disappearing until they mature, which rounds up to about 6 months. Occasional surfacing through the upper layer of the substrate may happen if the young snails are scavenging for some food.

The tank parameters do not affect initiating the mating process, but female snails were found to stop laying eggs at low temperatures (below 68 °F or 22 °C).

Assassin snails are carnivores. They attack other species of snails that are smaller than their size. If you have an assassin snail in your tank so you can feed it with bloodworms, shrimps, and other varieties of snails.

Assassin Snail slow movers generally sleep during the day and hunt during the night. Therefore, they always hide in the sand while burrowing or hiding from their predators.

The Assassin snail suffers from the most common disease is a parasitic infection. In this disease, you can notice some white dots on the shell of an affected assassin snail. Its treatment is extremely easy. You can use copper-based medications for their treatment.

The Assassin snail’s size is too small, only one inch. They achieve this size in their lifespan of 2-3 years.

Assassin snails only spend most of their time under the sand. This indicates that they are less active in the tank.

Is Assassin Snail Right For You?

Assassin snails are predatory. They eat other small snails and eradicate snail infestation. They won’t even go near aquarium plants as long as it’s for hiding. Hence these species of snails would be right for you because they won’t destroy the plants and be good tankmates for your fish.

How Many Assassin Snails Do I Need?

It depends upon you and your tank size. If you have a big tank then you can have several assassin snails in your tank. It also depends on how you care for them.

Do Assassin Snails Eat Each Other?

Why Are My Assassin Snails Stuck Together?

Assassin snails usually stick with each other only for breeding and they do this for around 10-12 hours.

They like to eat other species of snails that are smaller than their size. You can feed them with worms and other snail species to eat happily.

Numerous aquarium snails do breathe air, but the assassin snail isn’t one of them.

At a store, look for snails that appear to be up and active. Make sure there are no missing parts of its body, like a tentacle or an eye. Their shells should be devoid of cracks and splits, with an intact visible operculum at the top of their foot. 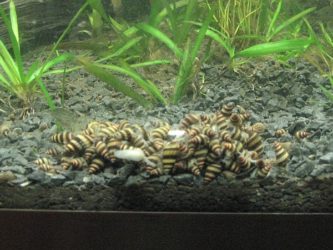 Assassin snails aren’t just an awesome way to get rid of most snail infestation problems, they can very well be an interesting addition to your aquarium.

Their bold stripes and amusing behavior make them fun to watch, along with the fact that they demand no special setup conditions, nothing should stop you from having them over!