The Cardinal Tetra is a delight for many aquarists, beginners and skilled alike. It is often mistaken as the Neon Tetra because of their likeness.

The difference between the two species is the Cardinal Tetra has a red strip all across its body, while the Neon Tetra will only display it halfway on the back half.

This species is very easy to take care of and can be kept with a lot of other peaceful fish, making a beautiful display of colors in your tank.

Being a blackwater fish, the Cardinal Tetra will not do well in very brightly lit tanks. Keep the light dim and add dark colored substrate, as well as some pieces of driftwood and tangled roots to recreate their natural habitat. Some dry leaves may be added to color the water naturally with tannins released, but they need to be replaced every few weeks.

South American river basins do not feature a lot of plants, so there is no need for heavy planting. Instead, provide a lot of open swimming space, as Cardinal Tetras are very active and fast swimmers.

As for the water chemistry, they prefer very soft and acidic water with a pH between 4.5-7, and water temperature between 73-81 degrees Fahrenheit.

The Cardinal Tetra mainly eats anything they can grab with their little mouth. In the wild, they are omnivorous, feeding on small crustaceans and worms, but in the home aquarium, they will accept regular flake food, live, or fresh foods.

Keep in mind they are in high need of vitamins, thus it is best to feed them mainly high-quality flake food.

If you plan on feeding your Cardinal Tetras twice a day, only give them what they can eat in about 5 minutes, but several feedings a day are always recommended. In this case, only give them the amount of food they would eat in 3 minutes.

If kept in a well-maintained tank with good quality water, the Cardinal Tetra will hardly become ill. But if water conditions become unstable, they are very likely to die off.

One particular disease affecting this species is the Neon Tetra disease, which was first diagnosed in Neons, hence their name. This is a very contagious disease of unknown cause, which is still incurable.

Though it is called Neon Tetra disease, it is known to affect other tetras as well.

They are very peaceful fish, which can get along with basically any other peaceful species. They do best when kept in very large schools, which makes them feel more secure.

They can, of course, thrive when being kept in smaller groups of up to 5 fish, but they may feel stressed out and probably pass away quickly.

Check out other easy schooling fish for beginners.

The Cardinal Tetra is a schooling fish, which feels more at ease when kept in a school of at least 5, but a larger group would always be better. Keeping at least 10 or more of them together will also help boost their coloration.

Avoid larger fish that may think of your Cardinal Tetras as food, especially because they are so small. Even other larger Tetras may eat them if they could fit them in their mouth.

Try to keep them with other small and peaceful fish like other small tetras, Loricaiids, pencil fish, dwarf cichlids, Gold Tetra, or small rasboras.

Also, you can add more species variety in your tank by placing snails, shrimp, or crabs, which pose no threat to your Cardinal Tetras.

Breeding can be quite tricky in the home tank and most fish are usually caught in the wild and shipped to the stores. If you still want to try to breed Cardinal Tetras, it is best to use a breeding tank and remove the pairs once the eggs have been laid to avoid eggs and young fry from being eaten.

Finding compatible pairs can also be a drawback, but can be achieved with a lot of patience.

The breeding tank must meet the same water conditions as those in their natural habitat, with optimal breeding temperature around 80 degrees Fahrenheit, but not lower than 75 degrees and a pH between 4.5-6.0, with very soft water and low lighting. 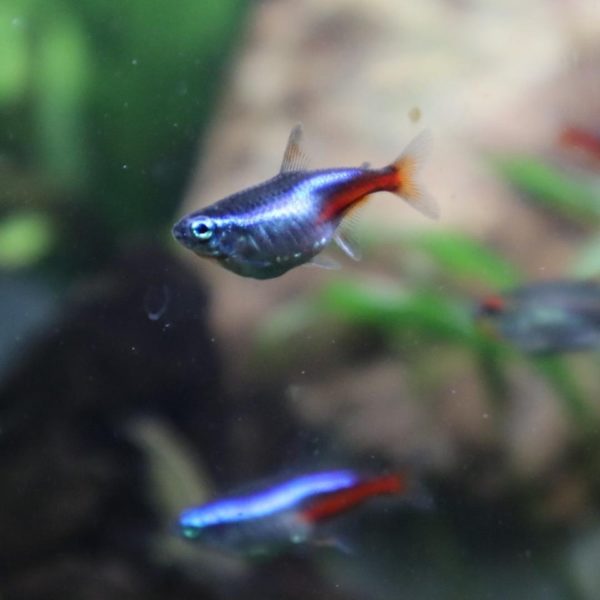 Cardinal Tetras, as well as the Neon Tetras, can make a sparkling addition to any tank, due to their bright coloration and very active behavior.

Remember to keep them in very large groups to make them feel more secure, while displaying the most vibrant colors.

Cardinal tetra and the Neon tetra are the most popular among the most favorite aquarium fishes. As they look very much similar, people often get confused between them. Cardinal tetras are slightly larger than Neons, but the major difference between them is that the neon tetra has a red stripe, and it goes up to only half of the fish’s body. The blue stripe of the neon tetra fish is less yet vibrant blue.

The body of cardinal tetra has more red and blue. Even though they are mostly available in red and blue colors, you can go for rare gold and silver colored cardinal tetras. There is little evidence by the researchers that states the color-changing attribute of this species.

It might be difficult for people with less knowledge about this fish family to differentiate between neon and cardinal tetras. Cardinal tetra males and females share almost the same color scheme, which makes it difficult to distinguish.

If you intend to keep neon tetras and cardinal tetras in the same tank, then you probably can. And you can prefer to school them together as well. This is because they are so similar in their looks that they will probably accept one another for schooling. Therefore, if you intend to keep six tetras in your tank, you can get three cardinal and three neon tetras for schooling or grouping them.

Cardinal Tetras are often overlooked but are wonderful freshwater fish species that are easy to take care of. They are peaceful, and peace lovers and are good for almost all types of aquarium and can add charm. These fishes are known for their lax husbandry needs and bright coloration. This species of fish demands just the right water conditions, and they can thrive forever. Individuals should have some prior experience in fish keeping to raise or pet the cardinal tetras. It is because you will need a stable environment to ensure that your tetra grows healthily.

Q. How do you take care of a cardinal tetra?

If you pet cardinal tetra, you should ensure that they get enough open swimming space in the tank. Cardinal tetras are quite active and are probably fast swimmers. If the water chemistry is concerned, the water needs to be soft & acidic, with a substantial pH level between 4.5 to 7. The water temperature for the tank with cardinal tetra should be between 73oF and 81oF. Feeding them appropriately over time is yet another crucial care concern for this species of fish.

Q. How many cardinal tetra fish can you have in a tank?

Cardinal tetras are known as the schooling fishes. It means that this species is not the one to be kept alone. They feel safe when they are kept in groups! It is their natural way of feeling safe in the aquariums, and they feel like when they are in groups, they can keep away the predators. Therefore, you shouldn’t deprive them of that feeling. And for doing that, you should consider adding at least five cardinal tetras to a fish tank that meets their water requirements. If you have a bigger tank, you can add even more cardinal tetras to the tank without any hassle. They live in groups, and it won’t be long before they all will become friends.

The cardinal tetras need lights over their tanks for around 12 to 14 hours like any other tropical fish. It will eventually help them maintain the circadian rhythm. You can prefer to get lights that you can set a schedule on. In this way, you can set the timer throughout the day for around 12 to 14 hours, which will give them enough time to settle into a specific routine. Some types of tetras, such as glowlight tetra and neon tetra, will need subdued lighting. Prefer using a low-watt fluorescent light that should be within 18 to 40 watts.

Cardinal tetras grow to be around 1.25 inches at max. The female cardinal tetras are slightly bigger and wider than that the males. Cardinal tetras are bigger than neon tetras, making them ideal for being aquarium fish. The neon tetra species grows to only 1 inch throughout their life span. They are smaller and are easy to care for in comparison to cardinal tetras. But that doesn’t make cardinal a tough maintenance species! It is just the comparison between the two easy-handling fish species of the same family.

Cardinal tetras carry a reputation of being too sensitive but are hardy in real. They are just like other tetras who need to follow some basic rules to stay healthy and well. The cardinal tetras are shipped from farther distances and travel throughout a day or more. Therefore, at least one week of quarantine is essential for the cardinals to recover, and they are not fed at this time. They need treatment for all sorts of bacterial diseases that might have been caused due to transportation in bad water conditions. The breeders will take the responsibility to feed them and help them regain the round stomach form.

Q. How often do you feed cardinal tetras?

If you prefer to feed your cardinal tetras twice a day, you should offer that much food that they can consume in 5 minutes. But for cardinal tetras, you should pick more feeding times in a day. If you increase the feeding times more than twice, you should offer them the amount they can consume in just 3 minutes. The foods you offer should be in small pieces, as the mouth opening for cardinals is pretty much small. Any bigger chunk of food will be rejected and will end up accumulating in the tank.

Yes, cardinal tetras can live well with bettas. It is because both of these species are not picky in terms of food. Therefore, they can eat one kind of food throughout their lifespan. Moreover, the cardinal tetras and bettas share the same water requirements, making them ideal for sharing the habitat. The cardinal tetras should be in a group of at least 5, and the bettas can be of the same numbers in the same tank. But if you are considering this addition, be sure to have a bigger tank for the purpose.

Q. Why are my cardinal tetras dying?

Cardinal tetras or any other fish will die if you do not properly care for them in your tank. If you are not recycling the tank before adding cardinal tetras, the water conditions might not suit them. They will immediately experience a fluctuation of water parameters and might not cope-up with it. Hence, this might be an ideal reason for them to die frequently in your tank. Overfeeding and rapid water changes are also vital reasons that might result in the death of cardinal tetras. So, consult your breeder for the right amount of food you must offer them and ask about the water change time gap.