The most engaging problem fish keepers’ face is dealing with fish diseases. If the symptoms are not detected and dealt with at an early stage, depending on the type of bacteria or infection, all of the fish in your aquarium might die in a single swoop. One of those problems is the Dropsy fish disease.

Dropsy is a fish disease that causes abdominal swelling, protruding scales, and lethargy. It can be caused by bacteria or kidney failure and is often fatal if left untreated. To treat it, identify and address the cause and possibly use antibiotics. Euthanasia may be necessary in severe cases.

The word ‘Dropsy’ derives from an ancient word in French – hydropse, which is based on a word formed by the Greeks – hydrops that is derived from hydro or its English meaning – water.

The Dropsy fish disease is more like a ‘health issue’, then a disease. It is like a combination of symptoms due to a decrease of the immune systems stability in the fishes within the aquarium. There is a bacteria that all aquariums have it and if any or all fish are somehow stressed from anything at all, from an environmental change or missing a feeding schedule, even being bullied by other fish, the immune system starts failing and the bacteria does its work. The belly starts dropping down and the fish who had contracted the bacteria appear like they are bloating. If the fish are healthy and thrive in a healthy environment without any stress factors, there is no danger in contracting the Dropsy fish disease.

The characteristically swollen belly of the Dropsy fish disease is the last thing you want to notice in your fish. It means the internal organs are injured and the belly of the fish started to fill itself with water and other fluids, leading to the fishes ultimate demise. In this stage, even with a fast medical response, it is more likely the fish will die. Some fish do not show any other symptoms at all, but there are a couple of symptoms that are visible to the human eye and if noticed on time, you can prevent the spreading of the Dropsy fish disease and even save the ones who are actually infected.

External symptoms are easy to detect, if the fish are showing them, like when the scales are standing out like a pinecone, have swollen eyes, pale gills, swollen anus with a bloody coloration, pale feces, a curved spine, clamped fins, lethargic movement (this is when the fish just hover near the top of the tank instead of swimming), losing their appetite and etc.

All of these symptoms progress aggressively, so if you notice even one of the mentioned-above, start reacting accordingly.

How to treat the Dropsy Fish Disease

If you ask someone what to do with the infected fish, most will advise you to euthanize them so the healthy fish can be safe from the infection. But if you detect the disease in its early stages, there is a possible treatment that can save the infected fish with Dropsy fish disease. 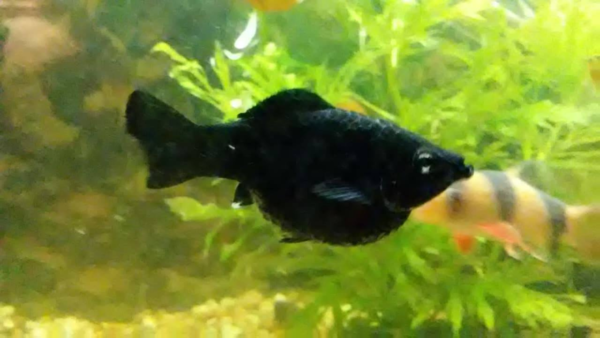 This what you can do:

How to prevent an outbreak

Like all bacterial infections, the best way to prevent them is a healthy and clean environment. Fish are quite prone to stress, and when they are stressed, their immune system fails. Maintaining a clean aquarium is a priority for all fish keepers, because low quality water is the number 1 stress factor for fish. Change the water regularly, maintain a clean fish tank, clean filter, do not overpopulate the aquarium (get another fish tank or create a larger aquarium) and be mindful of what, when and how much you feed your fish. Keep track of the foods shelf life; if you open a flakes package, use it within a month. Don’t feed them with a single food source, a healthy diet consists of freshness and variety.

Causes of the Disease

The nasty little bugger that causes the Dropsy fish disease is a bacteria called Aeromonas. It is a common bacteria, found in almost every aquarium. It is a “gram-negative bacteria” because it can be identified with a Gram Staining technique.

The Aeromonas can lead to the Dropsy fish disease only if the immune system of the fish in the aquarium is already failing.

This can happen if the fish are under stress by any number of stress-factors:

Basically the Dropsy fish disease thrives in an environment where there is at least 1 stress factor. If your aquarium is stress free, you have nothing to worry about.

Can a Fish Recover from Dropsy?

The dropsy infection is very hard to detect and is often diagnosed in the advanced stages. This makes it difficult to cure the condition with the right treatment options. Most of the fishes diagnosed with dropsy are often either isolated and kept under watch or euthanized to ensure that they don’t suffer more than they already are.

How Do You Treat Dropsy Fish Disease?

Dropsy is a very severe infection that affects fish due to poor living conditions. Although the diagnosis is quite bleak and very hard to get rid of, there are a few ways in which a fish can be cured with optimum care. The best chance at survival of the fish after contracting dropsy is by staying in isolation in a hospital tank. Treat the water with salt and feed them with high-quality and nutritious meals to optimize their immune system to fight the infection.

Is Dropsy Contagious to Other Fish?

Although dropsy is not contagious, similar species in close contact with an infected fish are at heavy risks of experiencing similar complications. So, if you find one or more fish in the tank exhibiting signs and symptoms of dropsy, it is ideal to isolate them immediately to keep the remaining fish in the best of their health.

What Happens in Dropsy Disease?

Dropsy primarily causes swelling of the soft tissues in the fish. This can be due to an underlying infection or issues with the organ function in the body that lead to excess accumulation of fluids in the body. Some of the common contributing factors include bacterial infection, a parasitic infection or even liver dysfunction in some of the variants.

How Does Epsom Salt Treat Dropsy?

The primary symptom of dropsy is the fish experiencing swelling around their abdomen. Since the infected fish are advised to move into isolation, treating the hospital water tank with Epsom salt has shown effective results. The dissolved salt in the water draws out excess fluid build-up in the fish and relieves the symptoms. Pair that with some antibacterial treatment, and the fish has a chance to regain the lost strength.

Can Humans Catch Dropsy from Fish?

Dropsy is often an aftermath of an undiagnosed infection or organ dysfunction in the fish. If a bacterial or parasitic infection causes the condition and the humans are handling the water tank with bare hands, there are chances that the person might contract the infection too.

If you add aquarium salt to treat dropsy in a fish, it should be done in an isolated hospital tank. Direct addition of large amounts of salt to the community tank will affect the lives of the other healthy fish co-existing with the infected fish. The aquarium salt restores the osmotic balance in the body and gets rid of the swelling or fluid accumulation that is caused due to dropsy.

How Do I Clean My Fish Tank After Dropsy?

Bleach and water solution works the best in cleaning the tank after a fish has contracted or died of dropsy. Vinegar isn’t ideal because it only eliminates bacterial infestation a little percent. Besides that, isopropyl alcohol treatment also works pretty well.