How To Lower Nitrite in Aquarium- Solved For Saltwater & Freshwater

The key to keeping your aquarium thriving is to ensure its proper care and maintenance. And it begins with keeping a watch on nitrite levels. Nitrite, being a byproduct of the nitrogen cycle, occurs naturally in all tanks. That’s pretty normal. But if it exceeds a certain level, it compromises the health of your aquarium inhabitants. A higher level of nitrite is extremely toxic and is known to cause several deadly diseases in fish. Thus, knowing what nitrites are, what damages they can cause, and how to lower their level is vital to keeping your aquarium healthy.

In the article below, we have attempted to outline everything about nitrite intoxication. So let’s dive into detail.

Nitrite is basically dissolved nitrogen that occurs naturally in your tank. It is a byproduct developed due to the breaking down of organic materials inside water. When waste materials like fish excreta, decaying plants, or left out fish food begin to decompose, it turns into ammonia and then changes to nitrite.

Yet, this is a natural process and will occur. But if you don’t pay attention to your tank’s maintenance, the nitrite level can grow out of control. And will lead to severe consequences for your aquatic inhabitants.

How To Lower Nitrite In Freshwater Fish Tank

Now that we have gained a good understanding of nitrites, it’s time to explore how to lower nitrite levels in freshwater tanks.

This is the quickest way to manage higher nitrite levels in your freshwater tank. Diluting nitrite-rich water with clean, de-chlorinated water will reduce nitrite concentration in your tank.

But remember to not overdo it. Excessive water change can also cause imbalance to your aquarium ecology. You can check how to perform an aquarium water change for more information.

At this point, it is wise enough to invest in some beneficial nitrite-converting bacteria. You can purchase these bacteria from any pet store or fish store, offline and online. Here are some options for bottled bacteria that you can look forward to 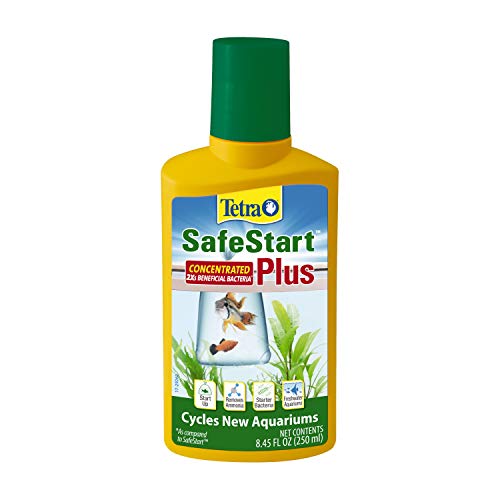 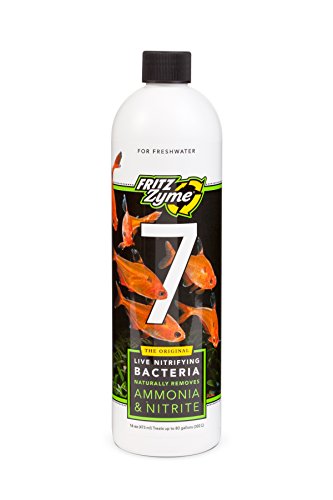 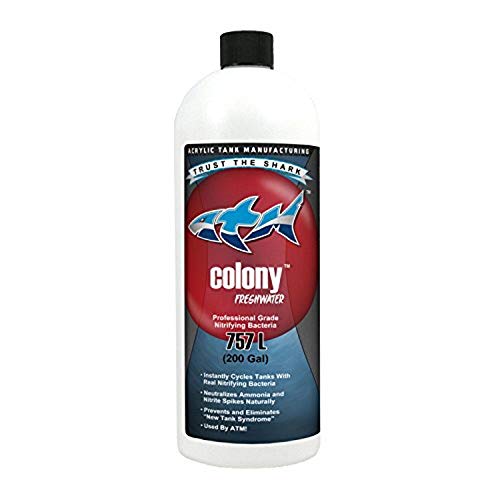 Installing a good filter is an important course of action to check nitrite levels in your freshwater tank.

A filter will clear out all waste and pollutants from the tank offering twofold benefits – raising oxygen levels in the tank and providing living space for nitrifying bacteria to thrive.

An increase in oxygen will help fishes struggling with suffocation due to reduced oxygen in their blood. Moreover, this is an effective step to speed up the nitrogen cycling process to reduce nitrite levels significantly.

Using water conditioners is another effective way to remove excessive nitrite from fish tanks. These conditioners work by binding nitrite, which converts them into harmless substituents.

Besides, these water conditioners can also bind heavy metals, ammonia, and other contaminants present in the tank. So, all you need to do is to purchase a handy bottle of Seachem Prime Water Conditioner .

How To Lower Nitrite In Saltwater Fish Tank

For saltwater fish species, nitrite is non-toxic. Alternatively, for freshwater fishes, it can prove immensely lethal. It is because, in freshwater, nitrite competes with chlorides in fish bodies. Since freshwater lacks chlorides, it fails to outpace the increasing nitrite levels and leads to intoxication.

The outcome of this is chloride depletion. As nitrites take over chlorides, a biological imbalance occurs.

On the other hand, in saltwater, the chloride and hydro carbonate ions help mitigate the impact of nitrite poisoning. At 1.94% of chloride levels, nitrites cannot outpace them, leading to no poisoning in fish.

That said, freshwater fishes are likely to be thousand times more vulnerable to nitrite intoxication than saltwater fishes.

If, due to any unfortunate instance, the nitrite level in your saltwater tank rises more than expected, then immediately balance it off by adding nitrifying bacteria. API Quick Start and BIO-Spira are two recommended fish-safe options for your tank. These will help speed up the establishment of bio-filter in your saltwater, thereby promoting the healthy growth of your aquarium inhabitants.

An increase follows a higher ammonia level in your water tank in nitrite levels. While several tell-tale signs can help you spot the danger of a surge in nitrite concentration in your fish tank. These include:

What Happens If You Don’t Lower The Nitrite In Your Fish Tank?

Nitrite poisoning is a serious condition that you should not ignore by any chance. If this toxic nitrite reaches the bloodstream of fishes, it reacts with hemoglobin to form methemoglobin. This condition restricts the oxygen flow in the blood, turning its color from red to brown. That’s why the condition is termed brown blood disease.

Due to this condition, fishes often struggle with breathlessness, suffocation, and stress. Also, you may see fishes losing their color and suffering from various skin infections like fin rot, edema, gill lesions, and ich.

However, different fish species may react differently to this nitrite poisoning. But, in general, they are likely to face the issues mentioned above.

What Amount Of Nitrite Levels Are Acceptable In A Fish Tank?

Nitrite is highly toxic. It can cause fatal diseases or even the death of animals, including fish.

Generally, an acceptable nitrite concentration in fish tanks is between 0 to 0.2 ppm (ml/g). Levels exceeding this can prove highly fatal. The rapid ingestion of this poisonous substance can put fishes and other inhabitants under stress. The same goes for ammonia; both ammonia and nitrite have a high toxicity. Their accumulation in the tank should be strictly avoided at all costs.

In an ideal tank ecosystem, the nitrite produced from ammonia converts to nitrate through nitrification. And then, denitrifying bacteria convert this nitrate into atmospheric nitrogen, thereby creating a safe and healthy environment in the fish tank.

If your nitrate reading while aquarium testing doesn’t reflect zero, you should act swiftly to manage it. Increase nitrifying and denitrifying bacteria in your fish tank to expedite the nitrogen cycle. Even so, if you fail to act quickly, you are at great risk of nitrite intoxication.

What Causes High Nitrite Levels In An Aquarium?

The significant surge in nitrite levels in your aquarium can occur due to the following reasons:

Overfeeding and overstocking fishes are two common reasons for nitrite spikes in aquariums. Stocking up more than needed fishes in an aquarium will increase waste production, disturb the biological filter, and lead to the generation of more ammonia and thus nitrite in water.

How To Protect Your Fish During a Nitrite Emergency

The freshwater aquarium owners should act swiftly as soon as they learn about nitrite toxicity in their tank. To protect their fishes during this kind of emergency, you should:

#2 Add rock salt to the aquarium water: By adding rock salt, you increase chloride levels in it. Higher chlorides in aquarium water will help combat the effects of excessive nitrites. It will ward off the risk of harmful nitrites entering fishes’ bodies through gills. Ultimately, this will make fishes less susceptible to intoxication.

Using one teaspoon of non-iodized salt per 10 gallons of water is ideally recommended.

But make sure to do your research before any action. Many fishes, such as loaches and corydoras, plus certain invertebrates and aquatic plants, are resistant to salt. To overcome this, you can go for aquarium-grade salt. However, even Kosher salt is a good option.

#3 Add an air-stone: Due to nitrite intoxication, your fish may experience difficulty breathing.

As nitrite enters their bloodstream, it reacts with hemoglobin to form methemoglobin. This compound so formed lacks oxygen which leads to suffocation in fishes.

Adding air stones to your aquarium is a smart bet to tackle this oxygen low. These air stones will enhance oxygen flow and extend relief to your impoverished fishes striving for O2.

Permanent Prevention Of Nitrite Spikes In Your Fish Tank

Preventing a surge in nitrite level in the first is better than dealing with the consequences when the situation gets worse. For permanent prevention of nitrite spikes in your aquarium, follow the steps discussed below:

#1 Clean and maintain your fish tank and filter regularly and properly. Use a protein skimmer for saltwater tanks for all-round cleanliness. They help remove all organic waste before it turns into toxic compounds. For freshwater tanks using an aquarium vacuum cleaner is advisable.

#2 Feed your fish accordingly. Ideally, feeding fish once a day is safe to prevent overfeeding and unnecessary waste generation. You can seek the help of an automatic feeder to ensure proper dosages. It is a trustworthy tool. You can feed your fish on time without letting them starve or be overfed. Additionally, it comes with the benefit of feeding your fish even when you are not at home.

#3 Add bottom feeders. Bottom feeder species such as corydoras, catfish, lipped plecos, etc., are great to add life to your aquarium bottom. They bring a lot of benefits to your aquarium. The biggest is that they dwell and scavenge near the substrate, cleaning leftovers on your behalf.

#4 Avoid cleaning all of the aquarium filters at once. Filters act as living spaces for nitrifying bacteria. Therefore, cleaning them too often is not recommended to hamper their growth.

#5 Clean your filter media with used tank water or treated tap water. Untreated tap water has high levels of chlorine which could harm essential bacteria in your aquarium. Click here to learn more about how to de-chlorinate tap water naturally.

#6 Avoid overstocking fish in your aquarium in a short span. Adding too many fish at once will serve no purpose; rather, it will only elevate problems. There will be a disturbance in the nitrogen cycle, waste will increase, and you will lose fish.

#7 Change 25-30% water every week. This will dilute the water to bring down its level of contamination, which will support beneficial bacteria to perform their work with ease.

#8 Add more plants to the aquarium. Certain aquatic plants like wisteria, duckweed, and water sprite prefer ammonia over nitrite. They can absorb nitrogen compounds directly. As such, increasing their numbers can help control damage greatly.

#9 Be sure to take care of your live plants in the aquarium. Prune them on a timely basis to not rot and release ammonia.

#12 Lower incoming UV light while cycling your tank. Beneficial bacteria tend to be sensitive to blue light, so remember to keep it a minimum when cycling the tank.

#13 Keep a regular check on nitrite in your aquarium water. There are nitrite testing kits available for both freshwater and saltwater tanks. 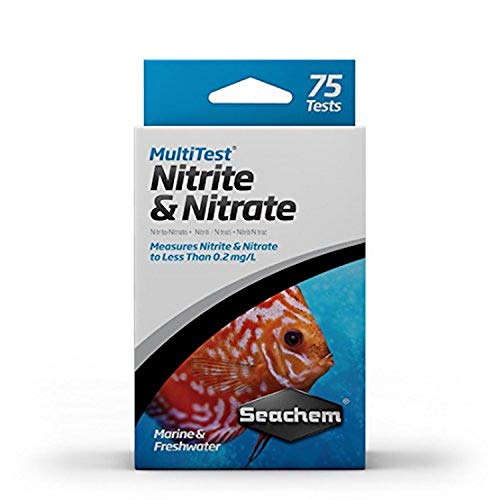 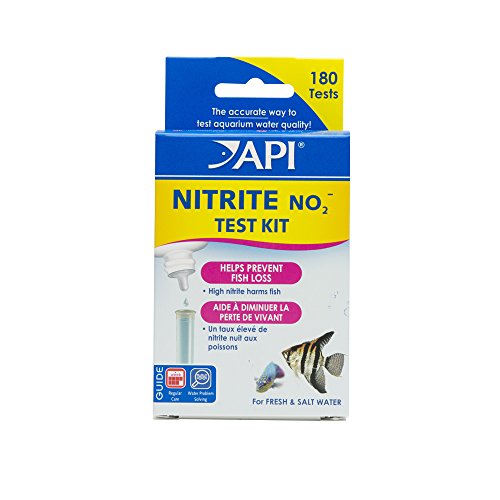 Nitrite is a toxic compound that can severely impact your aquarium animals. It can lead to fatal infections and even cause the death of fauna.

Thus, you must pay conscious effort towards understanding the underlying causes for nitrite spikes and their associated preventative measures.

Undoubtedly, the measures mentioned above help you lower the probability of encountering increased nitrite levels in the aquarium. But you must always pay close attention to signs and symptoms of nitrite poisoning.

If you feel like something is wrong and your fishes are behaving strangely, you must immediately get your aquarium water checked.