Let’s dive deeper into the world of these majestic creatures. We’ll take a look at their basic characteristics, eating habits, reproduction, and breeding.

Rabbit snails are large freshwater snails from Indonesia with attractive shells and color patterns. They are herbivores and should be fed algae and vegetables. Rabbit snails are slow-moving and peaceful, making them suitable for community tanks.

Rabbit Snails are peaceful slow-moving freshwater snails. If it’s your first time to see one, you might be surprised by its unusually gigantic size, which measures up to 5 inches.

They have long droopy antennae alongside a long rabbit-like face. Hence, the name.

The coarse wrinkled texture of their skin, which resembles an elephant’s, is the reason why some people call them ‘elephant snails’, in case you were wondering!

Their shells are shaped like a cone, with a recurring grooved spiral pattern.

Rabbit snails are curious by nature, yet they have somehow a ‘sedated’ behavior so don’t be worried if they sit still for a while. It’s normal.

Here’s a brief summary of their defining characteristics.

These types mainly vary in appearance, among a couple of other things. Their shells range from soft porcelain-like ones, all the way to heavily sculptured shells.

No matter what their type is, their main body will be bright orange or yellow, contrasted with a dark shell. The shell can be black, brown, or dark chocolate. It might feature some dots or texture too, for an improved sophisticated look!

Rabbit snails are among the easiest types of snails to keep and take care of.

You start with making sure that Nitrate and Ammonia levels are 0 ppm. To maintain their shells’ health and texture, it’s preferred to keep them in alkaline water. The optimal pH is around 8.2 to 8.4. Regular to semi-dim lighting conditions are preferred.

When it comes to the substrate, rabbit snails do well in both sand and gravel. Sand is preferable, as they’ll practice their digging and burrowing hobbies easily. Yet, they do well when it comes to gravel.

Their preferred tank mates include Neon Tetras, Dwarf chain and Zebra loaches, and Otocinclus. They do well with most shrimp species too, especially Sulawesi shrimp.

Accidents might happen, it’s normal, especially when you have a mixed population. If the shell is cracked, it can repair itself. Just make sure to cover the damaged area with something like nail polish or an eggshell and leave it. It’ll gradually regenerate.

What Do Rabbit Snails Eat?

When it comes to food, rabbit snails aren’t picky; they care about quantity rather than quality and probably will eat anything that looks edible to them.

They’re rather scavengers, and they love greens! For them, any type of vegetables or algae-based foods will do.

Their favorite dish would be a generous amount of ‘fresh’ greens. Lettuce, broccoli, peas, spinach, cucumbers, bell peppers, and blanched zucchini will be perfect.

They’re also fond of flakes, algae wafers, spirulina powder, algae pellets, and different types of pellets. They’ll accept soft algae, but only in the condition of having no other options.

Java Ferns are appealing to them, no matter how ‘full’ they are from eating other food, for a rabbit snail, there’s always room for some Java Ferns!

Technically speaking, the sole element we care about when we talk about feeding rabbit snails is calcium, as it’s crucial to keep their shells, which they can’t survive without, in good condition. Supplements are okay. Just make sure they’re Copper-free, as it’s toxic to rabbit snails.

Beware of the fact that they target green leafy plants to eat them, as they might attack your decorative plants in the aquarium assuming they’re food.

Food means a lot to these creatures; they’ll dig in the ground looking for food.

Rabbits snails are quiet and slow-movers. Therefore, they should be kept in tanks with other low-speed animals. Their mates could be shrimps or other rabbit snail species. The idea of keeping your rabbit snail with a fish is not a bad idea, but that fish should also be calm such as Millie’s other fishes like Cichlids, Crayfish, and Goldfish can harm them.

How Do Rabbit Snails Reproduce?

One common concern about introducing snails to your aquarium is the fact that they breed quickly. In no time, your 1 or 2 initial snails will form a population.

Luckily, rabbit snails are not like that. They breed slowly relative to other snails at least, producing one offspring at a time. Let’s take a look at how they do so:

Beware that these tiny creatures are born super hungry. They’ll start eating off any green stuff they see. Don’t be fooled by the petite size.

The offsprings are by no means shy. They’re inquisitive, and they start exploring everything around them immediately.

Worthy to note is that the life span of rabbit snails usually is between 1 to 3 years.

Rabbit snails do not have a long list of diseases, but you need to be careful about the leeches. The leeches prey on snails and eat them slowly. The rabbit snails caught from the wild usually have leeches and pass them onto their offspring. Leeches first attack the snail’s shell and then spread on the snail’s body.

If you find leeches on the body of a rabbit snail, you can dip your snail in salty water for 15 minutes, which will kill leeches, or you can just take the cotton pad soaked in alcohol and rub it on the leeches. 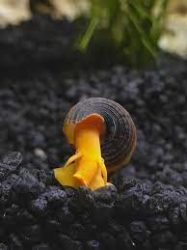 Rabbit snails are peaceful and quiet animals. They never harm any other species as they do not have aggressive nature.

They do not have a very long size. They can grow up to a maximum height of 5 inches, and 3 inches is considered their average size.

Are Rabbit Snails Right For You?

As we have described in the facts, they are one of the peaceful animals and do you harm others, and the major benefit of having rabbit snails in the tank is they quietly clean the tank and provide your tank with a unique look. Therefore, rabbit snails are right for you.

Baby rabbits’ snails look similar to adult rabbit snails. This is because they have had similar shells on their body since birth. This is the only reason they can eat when they come out from the egg.

Eggs of rabbit snails look like a creamy white eraser-sized ball. The Baby’s whole body structure is formed in the egg sack. The shell also grows up in the egg itself. Egg breaks after 4-6 weeks of breeding.

The short answer is Yes. Rabbit snails do burrow.

Rabbit snails are ‘lazy’ creatures, if we may say. They’re slow and they don’t move much. Yet, they burrow constantly, especially if you have sand substrate. You’ll see them climbing plants as well.

Probably they won’t be doing a lot of burrowing in gravel.

How Long Do Rabbit Snails Take To Grow?

It mainly relies on looking after your rabbit snail and its living condition. Generally, rabbit snails take one year to grow up to 1.5 inches, provided they’ve been looked after very well.

The fact that rabbit snails are gigantic protects them from assassin snails, as they won’t be able to attack them in such size.

Beware, if they’re hungry, they’ll have no other option rather than opting for bigger prey. So, don’t rely on the size thing.

However, they’re more than capable of attacking baby rabbit snails. You have to be careful in such situations. But again, rabbit snails won’t breed if they’re placed in the same tank as assassin snails.

While not the most common snails out there, rabbit snails are interesting and good-looking. Most importantly, they require minimal care, just give them food and they’re satisfied.

For these reasons, they’re getting more popular lately. We tried to give you an in-depth view of them throughout this article. We hope it has helped you and maybe encouraged you to buy one!