Can Ghost Shrimps and Bettas Live Together?

Continue reading to learn everything you need to know about keeping ghost shrimp and Betta fish together in your freshwater aquarium!

To learn more about the Betta Fish here.

The short answer is that, as pets, Ghost shrimp and Betta fish can live together. You can also feed your bettas Ghost shrimp. However, a lot of factors determine their compatibility.

Ghost shrimp are an underappreciated aquarium addition that may be as interesting as watching a fish move around. They are more likely to emerge from their hiding places at night because there is less possibility of being eaten, but if they are happy with their surroundings and other fish in the tank, they will constantly be foraging in the front. Because these shrimp are transparent, it’s very entertaining to watch them eat biofilm and other residues, which you can then see pass through their bodies!

Ghost shrimp are a dwarf shrimp species that may grow to be quite large and take up a lot of room in nano tanks; males grow to be around 1.5 inches (4 cm) long, while females grow to be approximately 2 inches long (5 cm). Although these shrimp are named after their practically transparent bodies, some may have faint yellow, grey, or brown undertones. During spawning occasions, females may even exhibit green eggs under their abdomen. Ghost shrimp shouldn’t be mixed with dwarf crayfish; Dwarf Crayfish aren’t very peaceful.

Bettas and Ghost shrimp can exist together. It is possible, however, that your Ghost shrimp will be devoured. A feeder shrimp is another name for a ghost shrimp. When kept with Betta fish, this is especially true. Due to their low price, they are great tank mates to discover how aggressive your Betta is. He is less likely to kill other fish if he doesn’t kill those first. Even if he kills them, at the very least, they’ll be a good snack for him. The following points are important factors that determine if your Ghost Shrimp is compatible with your Betta Fish.

Introducing your Ghost Shrimp to you Betta is extremely important. This will make sure that your pets are acquainted with each other in a better way. This will keep your pets comfortable and happy too.

The first thing you should do is make sure your tank has plenty of hiding spots. Hideouts will aid in the safety of your Ghost shrimp. Plants, driftwood, rocks, and ornaments are all excellent additions. Your shrimp will be more likely to explore the tank and come out if they feel protected.

Before attempting to mix any other form of livestock with your Betta fish, it is usually suggested that you have at least a 10 gallon (37.9 L) tank.

This will assist create more physical distance between your shrimp and your fish, reducing the chances of them colliding during the day.

If you have a particularly aggressive or ravenous Betta fish, even the tiniest movement will pique their curiosity, regardless of distance. Ghost shrimp are known for their fondness for hiding places.

Ghost shrimp will hide best in thickly planted aquariums with plenty of hiding places.  Plants will not only contrast beautifully with your betta’s hues, but they will also help to keep your Betta healthy. If your Betta fish is very aggressive, placing a mirror next to the tank’s side every couple of weeks may be beneficial. Your Betta fish will become enthralled and flare as a result of this, bringing further enrichment. Keep the mirror away from the tank for as long as possible, as bettas can become infected if they flare up too frequently.

Look for a Betta that lives with a shrimp

If you haven’t previously bought a betta, look for one that lives with shrimp. While you won’t find this at big-box retailers, it’s far more frequent in pet stores. When a Betta lives among shrimp, you know the chances of him attacking them are little to none. Furthermore, bettas housed in cups are typically much more harmful. Indeed, they do not survive as long as bettas, permanently housed in a large tank.

While not a proven approach, ensuring that your Betta is fed a high-quality diet regularly may help it avoid biting your Ghost shrimp. Bettas should be fed tiny amounts of food three times per day. Betta fish pellets are widely available at local aquarium stores. However, bettas should have a varied diet that does not overlap too frequently. A variety of live, frozen, and freeze-dried feeds, as well as brine shrimp, bloodworms, insect larvae, fish flakes, and pellets, should be fed to them. Bettas are omnivorous, so that they may enjoy a vegetable nibble now and then. Live foods will pique your betta’s interest and may give the level of enrichment required to satisfy its predatory inclinations. If your Betta is preoccupied with anything else, your Ghost shrimp may be left unattended! Other high-quality items will keep your Betta satisfied for longer, making it less likely to try to eat other objects in the tank. It’s worth noting, though, that bettas are prone to becoming overweight. Because of the added weight of their finnage, bettas with longer fins may have difficulty swimming off extra food. So, it’s crucial to keep food portions under check.

One of the most important components of your Betta tank’s setup is how to decorate it. You should strike a nice balance between your Ghost Shrimp and Betta’s preferences, as well as your own. Skulls and castles, for example, have recently fallen out of favour as fake decorations. The natural style has become increasingly fashionable in recent years. The best Betta fish decorations, however, are still a mix of the two! 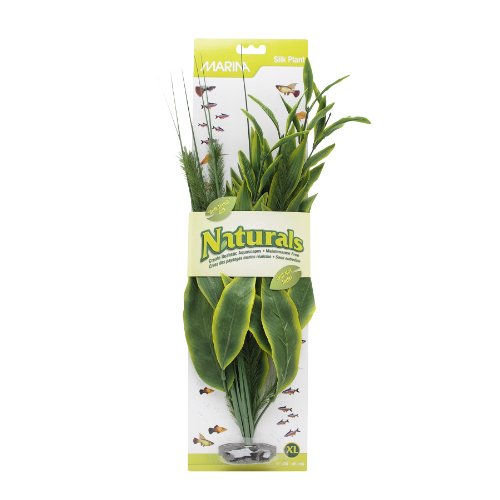 Checkout the Price on Amazon 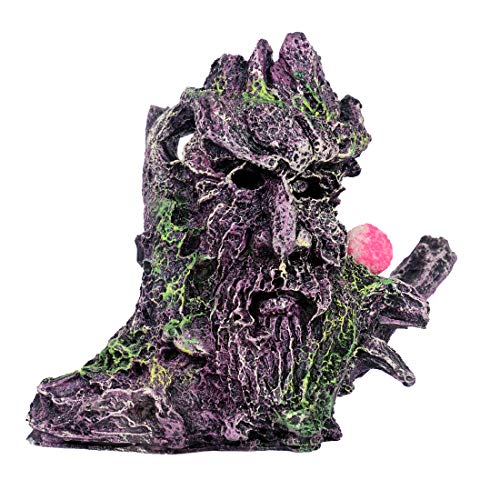 Rocks are a fantastic option. Using a coconut shell, on the other hand, ensures that you keep away from sharp edges once more. You’ll be providing a cave for your ghost shrimp to hide in, which they’ll love when they’re moulting. Betta fish love to live in caves. These won’t harm your Betta’s fins as they’re soft to touch. Because these shells have a narrow entrance, your bettas may not be able to fit inside. However, if you’re looking for a private ghost shrimp cave, this is the place to go (though be careful choosing this one as there is a risk your Betta fish may get caught or stuck inside). Caves are a great hiding place. These can keep your pets safe from being hunted down. You can buy these here.

Checkout the Price on Amazon

Artificial plants are interesting to discuss for those who don’t want to deal with additional complexity in their aquariums, however there are some wonderful starting aquarium plants that are ideal for ghost shrimp and bettas. Anubias barteri is one of my favourite plants to use. Java fern and java moss are also excellent possibilities. All of these are ideal for a low-tech, easy-to-maintain planted tank. You can buy these No products found..

Ghost shrimps are known to devour fish faeces that has accumulated at the tank’s bottom. Fish poop, on the other hand, isn’t a component of their normal diet in the wild. As a result, they won’t eat Betta fish waste like they would algae or decaying organisms. Betta Fish waste will turn into bio-film in a well-matured tank. And, in most cases, ghost shrimps will eat the biofilm rather than the faeces. On this, hobbyists have differing viewpoints. Some claim their Ghost Shrimps eat faeces. The others claim that their Ghost Shrimp has never eaten crap. So, while there’s no guarantee that your ghost shrimp will eat fish faeces, they’ll most likely do so.

Fish poop is neither beneficial nor bad for ghost shrimp when ingested in moderation. Fish excrement is high in protein and minerals such as phosphate and potassium. It is, however, high in ammonia, which can affect your health if ingested in large quantities. Ammonia is extremely harmful to shrimps, with the ability to wipe out an entire colony. It not only weakens the immune system and causes diseases, but it also reduces the shrimps’ reproductive capacity. As a result, don’t count on ghost shrimps to clean up the fish waste in the tank. Betta Fish faeces can make up a tiny part of their diet, such as snacks, but it should never be used to replace shrimp food.

How Many Ghost Shrimp Can You Have in a 5 Gallon Tank With a Betta?

With your Betta Fish, you can have 5 ghost shrimp in your 5.5 gallon tank. While some Bettas may not mind, some may be bothered by the presence of a Ghost Shrimp! They are scavengers who will eat anything they can get their hands on with their tiny pincers. They aren’t algae eaters by nature, but they will consume bush algae that other algae eaters won’t touch.

The best option is to start from the bottom and see whether the Ghost Shrimp disturb your Betta. If your Betta isn’t eating, you can continue adding ghost shrimp, but in a 5-gallon fish tank, ten ghost shrimp is a safe bet. Every few days, it is recommended to change some of the water (only 30-50 percent ). Clean the tank at least once a week to avoid harmful waste accumulation. Ghost shrimp might very well thrive in a wide range of water conditions. The ghost shrimp may live happily as long as the temperature is between 65 and 80 degrees Fahrenheit and the pH is between 7.0 and 8.0. Bettas require a temperature of 76-80 degrees Fahrenheit (preferably 78 degrees Fahrenheit) and a pH of 7.0 or above. As you’ve seen, they complement each other wonderfully in this regard. Furthermore, they both enjoy rushing water (provided that the stream is not too strong). Also, ensure that the tank is cleaned and the concentrations of ammonia, nitrite, and nitrate are minimal. Your Ghost Shrimp will perish and your Betta will grow unwell if they rise too high.

Having Ghost Shrimps and Bettas together would be a great method for a true hobbyist to get their feet wet in the aquarium industry. Bettas are low-maintenance, and since ghost shrimp and bettas share many of the same circumstances. They should get along swimmingly if you keep everybody properly fed.

To know more about the Betta Fish’s compatibility with Guppies, here.

PrevPrevious7 Best Rimless Aquariums
NextFish Food Alternatives: What Can You Feed Fish Other Than Fish Food?Next