The Lemon Tetra also scientifically known as Hyphessobrycon Pulchripinnis is a freshwater aquarium fish that is highly popular among aquarium enthusiasts.

The fish are known for their characteristic transparent color and rather small bodies. They like to inhabit clean waters that are clear will minimal current and therefore they easily adapt to home aquariums when collected from the wild and introduced to their new habitats.

These are among the most east to care for aquarium fish that you will find in the industry today. The fish doesn’t need lots of attention as long as you ensure that you make the basic requirements for keeping fish in the aquarium up to date.

The fish are usually relatively small in size and will measure a maximum of two inches at least five centimeters long! If you take a casual look at the fish you will notice that it exhibits a transparent coloration. However, when the fish is well cared for and properly fed when in captivity, it has a tendency to show lemon-like coloring on the overall body. There is an albino color morph of the fish that has been developed, although the lemon color variety still remains the most popular. 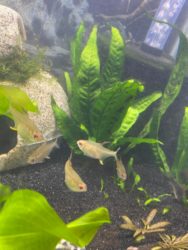 The fish prefers to live in quiet waters that are clear and clean with moderate current in the wild. In the wild the fish is known to inhabit in shallow waters near the banks of streams or rivers near the shores. The fish likes heavily vegetated areas on narrow portions of the stream where they cannot be hit by direct sunlight. This is why when introducing the fish in an aquarium setting, it is best to mimic what they live in the wild as much as possible.

An ordinary healthy lemon tetra can live anywhere from 4-8 years. However, there isn’t a strict say in this. Some people have reported that their lemon tetras have exceeded the expected frame of life expectancy.

However, most of them live up to 6 six years in an artificial setting. The life of a lemon tetra depends on its mental state and surrounding environment.

Basically, the lemon tetra is an omnivorous fish that feeds on other tiny animals in the wild. Some of the popular food that it eats in the wild includes; crustaceans, invertebrates, and other plant matter. This fish is so easy to feed because in captivity it will readily feed on anything it is offered. That said, you can easily feed them live or frozen fish food, high quality prepared fish food and live worms as well.

You have to feed your small Lemon Tetras twice to thrice (on average) in a day. However, if your fish is sick, you can cut the frequency to once a day.

The best part about having lemon tetras is their adaptability to a broader range of environmental conditions.

Do you know tank decoration can affect the mental state and body color of your lemon tetra?

Studies say that the lemony tint on tetras can appear to fade away and instead look ashy grey if they are stressed or anxious. Thus, along with keeping them in schools, it is essential to keep the tank environment as natural as possible. 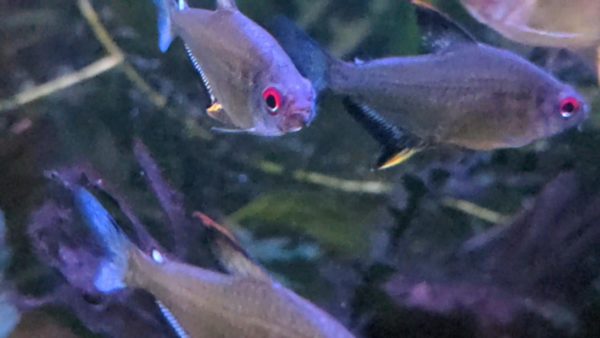 Since Lemon tetras are freshwater fishes, the pond is highly lushed with greens and live plants. So, to mimic the environment and give a ‘Brazilian-Amazon’ touch, you can add live plants like Anubias.

For a wild biotope, lay a fine layer of sand on the base. As you move upward, you can add driftwood or roots.

You can also add floating plants, taller stem plants for a natural touch. However, make sure that there is ample space to swim through the green for the fishes.

Lemon Tetra is certainly one of the easiest freshwater fishes to keep in a home aquarium and care for. It doesn’t need much attention from the aquarist so long as all the basic care details for aquarium fish are observed. Because the fish shoal in large number when in the wild, it is best to keep them in groups while in the tank. Ensure that the aquarium water you are going to keep the fish in is soft. The fish is a community fish who will live with other small species of fish although it is best to keep only the fish species in the same tank.

To help keep you in the loop about how best to keep and care for this freshwater aquarium fish, here are some tank requirements for you to follow:

Lemon tetras are a fun-loving species of fish. They have a lot of fun swimming around and are also reasonably lively. Lemon tetras thrive in groups, and when left alone, they might become agitated.

In the open habitat, lemon tetra congregates in big groups known as shoals, containing tens of thousands of fish! Similarly, during the day, pet lemon tetra form groups and tour the tank together.

Lemon tetras are fantastic additions to community aquariums since they are not combative and are easy-going. They generally keep the peace, yet the males occasionally display minor violence toward one another when courting females.

A few minor fights result from the slight hostility, but they rarely result in significant injuries. Larger fish intimidate them, yet they thrive on invertebrates like shrimp and snails.

Lemon tetras get together with a wide range of tank mates, making them an excellent choice for community tanks. You must, however, maintain the peace. 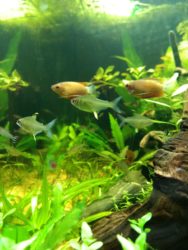 Lemon tetras are small and vulnerable, making them easy prey for fish. You should avoid enormous, aggressive fish. If you would like to keep a cross-species tank, choose fish of similar size and have a calm temperament.

You could try tank companions such as:

Tetras are fragile and lack combative bodies. Therefore, they will either be bullied or murdered on the spot. The aquarium fishes listed below are not safe for use alongside lemons: 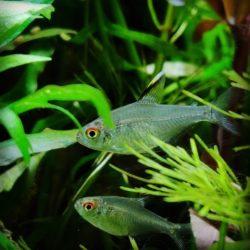 Breeding adult Lemon Tetra is easy but attempting to breed its juvenile can be quite an uphill task for you. Fortunately, identifying adult of the fish is quite easy as the adult males and females are easy to distinguish just by a look at their anal fins. That of the male is usually wider and even becomes bigger when time for breeding is ready. You can condition the fish to get ready for breeding by feeding them live foods. This usually helps to hasten their breeding and then you can separate the conditioned fish (both the male and female) in different tank. This will help to avoid the possibility of the other fish from feeding in the eggs laid by the female.

The ease of breeding a lemon tetra is moderate. They can breed either quickly or with some reluctance depending upon the type of tank mates they have.

Diseases that affect other aquarium fish can still affect lemon tetras. The caretaker must be able to safeguard their pet fish against bacterial and parasite illnesses. All of this puts the fish’s health, as well as its survival, in jeopardy.

Another disease to be careful of is ich. Itchy white patches on the fish’s body cause it to scratch its sides against rough surfaces, indicating the disease.

The good news is that the owner can significantly reduce the occurrence of these horrible ailments. Because most infections are spread by contaminated water, we recommend replacing the water in your tank regularly.

Replace the water every other week regularly. To reduce the growth of dangerous compounds (such as ammonium) that are beginning to thrive in the fish’s habitat, you should take 20 to 50 percent of the volume.

Are Lemon tetras Right For You?

If you are a prominent aquarium owner or a beginner who hasn’t specialized in fish keeping, Lemon tetras are the best fit for you. They get along with other small fishes and have a social nature.

Moreover, their feeding, breeding, and cultivation aren’t an issue as these factors are as flexible as their personality. 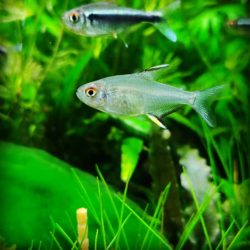 How do you take care of a lemon tetra?

Lemon tetras aren’t big-sized but relatively small fishes. Hence, their diet comprises primarily small items like brine shrimps, mosquito larvae, or bloodworms. Feeding your fish on time, i.e., multiple meals split across the day, is a great way to take care of your Lemon tetra. Don’t feed them more than 2-3 minutes, or else they will get sick.

Why are my lemon tetras not yellow?

The body color of the lemon tetras is heavily governed by factors like tank temperature, diet, and water conditions. Moreover, their psychological state also plays an important role. Thus, to achieve the perfect color of the fish, we advise you to leave them undisturbed.

How long do lemon tetras live?

A healthy lemon tetra is expected to live anywhere between 7-8 years in an artificial environment. However, the average lifespan of most lemon tetras is generally six years.

No, Lemon Tetras aren’t aggressive but rather peace-loving fishes that do exceptionally well in social settings and live-in harmony with other fishes of the shoal. However, some believe that they are moderately aggressive and shouldn’t be kept along with smaller fishes in the same tank.

Yes, Lemon tetras are hardy fishes that can tolerate a wide range of water temperatures and various live-in conditions, making them a perfect fit for a beginner aquarium hobbyist.

Lemon tetras, like other tetras, are omnivorous and can consume a wide range of diets involving small invertebrate and minute plants.

Lemon tetras are a perfect choice if you are looking for schooling fishes. They live in a group and brighten the aquarium. Ideally, the school can be as big as it can get. However, the smallest best for artificial settings ranges from 5-6 fishes in one tank.

Unfortunately, yes. Lemon tetras can nip fins of other small fishes without provocation. They nip other fishes by their frontal teeth. However, if you place them in a bigger tank.

Do lemon tetras go to school?

Yes. Lemon tetras school very well with their counterpart lemon tetras. But if you put them along with some other species or tetras of other species, they won’t school together. For instance, a neon tetra may pair well with a lemon tetra, but a black tetra won’t.

A less discussed advantage of owning a Lemon Tetra is their ability to withstand without food. Some fishes are sensitive to such activities; thus, one cannot risk their lives. But that isn’t the case with this tetra.

Lemon Tetras are said to go without food for up to 14 days which is too long for a fish. Even after that, they can still manage to look healthy and bright.

So, if you are looking to add extra ‘life’ to your aquarium, you should go for them.